I’m not big on idolizing human beings (as none of us should be, I think we can all agree). Really, I probably overreact to my pre-Christ culture, which included the secular obsession with the rich and famous, as well as Catholic saints (for the record, I love Catholics and had a great experience growing up Catholic, but I reject the practice of idolizing saints). However, I have learned in recent years the balance of appreciating people who have spent their lives well for the Kingdom, leaving an eternal legacy that far outweighs any earthly one. I don’t want to teach my children someday that some people are super-saints who we hold up high and revere as near deity. We strive to be like Christ, and need no other example, of course. But in a world that truly does idolize people who, by my assessment, are really wasting their lives for no worthy cause, I see the value in encouraging future generations to look to people who spent their lives for the One Worthy Cause.

All that to say, I have said before that Jim and Elisabeth Elliot are two of my earthly heroes. By my estimate, they spent their lives for eternal causes and left an admirable legacy. In short, the Elliots, with several other similarly admirable people, put all their energy into taking the gospel to an unreached tribe in Ecuador. When the men reached the tribe, they were killed on the spot. Later, Elisabeth and the women took their children to live among the same tribe that killed their husbands. Their love and forgiveness were two major factors in slowly leading that tribe to Christ. Aside from that inspiring story, the Elliots are also very godly people in general who have a lot of biblical wisdom to offer (I recommend reading any of their books).

So I said all of that to point to two of Jim Elliot’s famous quotes that are special to my life. They’re not more important than scripture to me – not even close — but they echo ideas from scripture in a wise way, and I appreciate that.

Since we were first married, my husband and I have had this quote framed in our living room: 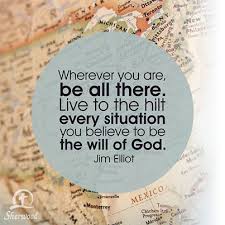 You may have heard it before. We cherished it as a bit of a family motto from the beginning, in seeking to go into the same line of work as the Elliots. It was a long process with a lot of waiting, and even after we got started we were instantly thrown off course and sent, at the last minute, to a different country than planned. We clung to this motto as we lived in a “stand-by” country for a couple years.

But I was clinging all the more to this motto in our years of infertility (see, there is a point to all this rambling!). I really do think that, in addition to, and perhaps more than, talking about where we geographically are in life, Jim Elliot was encouraging us to “be all there” in any situation in life. It was a great fear of mine that I would waste those barren years (which, at the time, I didn’t know weren’t endless) just waiting for them to be over with already. That’s a fear I have for you, too.

One reason I’m convinced he meant that is because of the second quote I want to share. Jim wrote it to Elisabeth before they were married, in a loooong time of debating/praying over whether it was best for the Kingdom that they should marry at all.  I found it in my favorite Elliot book, Let me be a Woman, while I was in the midst of a loooong, long distance engagement with my now husband. He said: 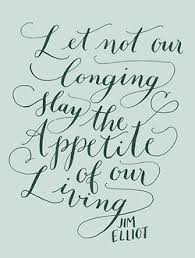 An extra thought: Could I encourage you to at least use some of this time as an opportunity from the Lord to pray about if you really are using your life to the fullest extent for the Kingdom? He may not ask you to move to another country or be killed by a tribe (but He really may!), but He may be asking more of you, and this is His time to get your attention. Don’t let it pass you by because your eyes are fixed on something else.

One thought on “Be all there”

This is a blog of biblical encouragement, specifically for women walking through infertility. To learn more about my hopes for this site, please visit the About page.